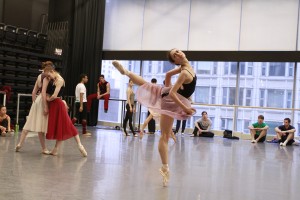 The Joffrey follows their winter narrative comedy of errors with a springtime plunge into the psyche. The rising stars in this case are Edwaard Liang, Julia Adam—both of whom have choreographed for the company before—and Yuri Possokhov, who makes his choreographic debut. By coincidence or design, both Liang and Adam explore the world of dreams, the former on a mass scale, the latter on the individual. Liang has been inspired by cultural consciousness before; his beautiful and strange 2008 “Age of Innocence” was about gender hierarchy and repression in the Victorian era. This piece, entitled “Woven Dreams,” is set to string pieces by Ravel, Britten, Galasso and Gorecki and abstractly pursues the collective consciousness. In “Night” Adam is content with following just one dreamer through her subconscious landscape, good and bad. Possokhov splits the dream worlds with “Bells,” a romantic, five-movement piece set to Rachmaninov’s 2nd. (Sharon Hoyer)