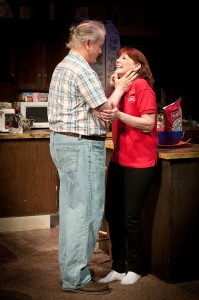 Who knew attempted suicide could be so funny? “Rantoul and Die” playwright Mark Roberts’ day job is scribbling TV sitcoms—”The Big Bang Theory,” “Two and a Half Men” and his own recent creation,  “Mike & Molly”—which explains the easy-flowing laughs that make the first act a hilarious if often insensitive romp. (You’ll be aghast at times at what you find funny.) Erin Quigley directs at a crackling pace that lets the actors shine; staging both acts  in ninety minutes without intermission.

American Blues is still rebuilding after leaving its long-term home a couple years back, but if you want to know what it stands for, you’ll see it on display here in this small but comfortable space: kick-ass acting by its ensemble and accomplished friends. Half the cast here is made up of two stalwarts of the Steppenwolf ensemble, Alan Wilder (the sniveling “pussy” Rallis, as Guinan’s Gary aptly calls him, in a role that shows him to be a hell of a trooper as an actor) and Francis Guinan (a personal favorite, here playing a working-class brute with zen); the other half equally stellar American Blues ensemble members Kate Buddeke (the unlikely object of romantic obsession, a hard-as-brick coquette) and Cheryl Graeff (the manically happy manager of the Dairy Queen with an unnatural fondness for cats and, of course, a dark secret).  Frankly, you could listen to these four read the newspaper and be riveted.  Which smooths over the fact that the second act loses comedic steam, playing off twists and “shocking” reveals that the seasoned playgoer will anticipate, having been too often fed a steady diet of journeys into the dark dark belly of the blue-collar beast. (Brian Hieggelke)