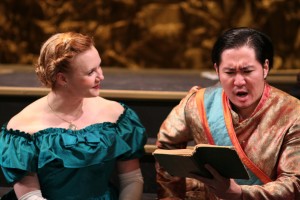 You have to hand it to L. Walter Stearns, who is ending his twelve-year stint as artistic director of Porchlight Music Theatre: he is going out with a bang, to be sure, directing what may be his best-ever production as the company takes on its first-ever Rodgers and Hammerstein musical.

Introducing the show from the stage each night as has been his trademark, Stearns’ contagious enthusiasm manifested itself as usual on opening night, though along the way in thanking various folks “from the bottom of my heart” for making his years at the helm of Porchlight “so joyous,” the emotion spilled over into tears. It is that same deep sensitivity that has guided careful attention to details in Stearns’ shows—often on a shoestring budget—and which is very much in evidence in his careful direction of “The King and I.”

Richard Rodgers’ daughter Mary, a composer herself, always considered “The King and I” to be the best collaboration between her father and Oscar Hammerstein II and indeed, when all of the elements are so rightfully in place as they are here and immensely enhanced by an intimate setting, it would be hard to argue the point.

Originally a star vehicle for Gertrude Lawrence, Lawrence died early in the run and the focus shifted to the young unknown Yul Brynner, who created the role of the king on stage, magnificently transferring that performance to an Oscar-winning film performance, countless stage revivals and even a short-lived television series. His shadow is a long one, but the best post-Brynner productions are those that manage to bracket his trademark mannerisms and elocution and restore the lead to the governess Anna Leonowens (Brianna Borger) and concentrate on the tension between the pair that eventually spills over into an unconsummated romance. 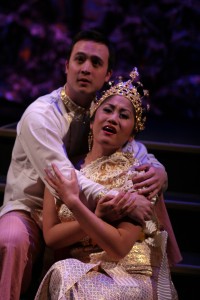 With Wayne Hu as the king, we have a young royal foil for the governess, which is what the show originally intended. It was also great to hear the king actually sing what was written for the role, a real rarity, and revealing how melodic the king’s music can be. Stearns also includes all of the songs not in the film that are often cut from the show, which is a real treat, especially when sung at the extraordinarily high level of Borger and Hu.

This twenty-one-member cast is said to be the largest in Porchlight’s history, and all of them—including every child—are wonderful. The stunning costumes were made in Thailand and the production also spotlights the world premiere of an immensely effective two-piano version of the score that was commissioned when the show premiered some sixty years ago but sat in a drawer until last year. The score is performed on two grand pianos across the stage by longtime Porchlight music director Eugene Dizon and Allison Hendrix. Choreographer Brenda Didier has done a remarkable job of transporting the elegant style of Jerome Robbins’ “Small House of Uncle Thomas” dance sequence to a smaller company and venue and the cast is even recruited to offer assorted percussion accompaniment. (Dennis Polkow)