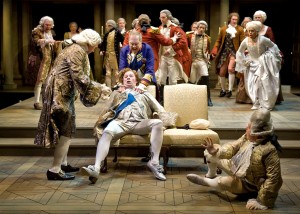 As the acclaim and popularity of “The King’s Speech” and a billion people reportedly tuning into last week’s royal wedding reminded us, we continue to be fascinated with British royalty despite that ancient institution’s ever-increasing irrelevance to anything to do with the modern world. The contemporary sovereign having been reduced to a mere figurehead, it is the prime minister, as we all know, who wields the actual power in Great Britain, though when a couple of high-profile former prime ministers were left off the guest list of last week’s wedding, it was taken as a royal commentary on their performance. Snub, yes, but in a former age, they would have been taken to the Tower of London and dispatched. Times have changed.

Although “The Madness of George III” is set in the eighteenth century during the reign of the king who, in popular culture, lost the American colonies and then went mad, playwright Alan Bennett uses that scenario to plummet into far deeper issues of the role of power and control in a monarchy. The king, of course, is losing control—or so it would appear—in a time and place that, above all else, puts the highest premium on restraint. Losing your British calm, even if you are the King of England, could have your subjects label you as unfit to rule. Add to that greedy children just waiting in the wings to exploit a royal weakness have their turn at power, and you have fascinating human as well as political intrigue.

Harry Groener makes a marvelous George III, wonderful at putting on the royal airs expected of him, and even more wonderful as he keeps those airs as he begins to lose his grip on his world. Ora Jones is his queen, wife and wonderful soulmate who is cruelly removed from the world of the king by their greedy royal children (Richard Baird, Alex Weisman). But what really makes director Penny Metropulos’ production soar is the way that the increasing “madness” of the king is contrasted within such a strict eighteenth-century sense of control. And Bennett’s script, revised since his screenplay version, feels as relevant and fresh as ever. (Dennis Polkow)