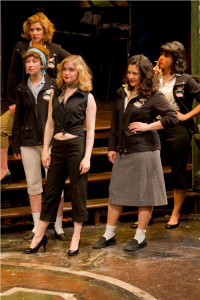 It’s hard to remember so much excitement about a theatrical production in such a small space before the show even opened, but this is no small affair. “Grease,” the biggest show to ever come out of Chicago, once owned the  record for Broadway’s longest run and resulted in one of the most successful movie musicals (and soundtracks) in history. But on its way to becoming America’s sweetheart, “Grease” lost its Chicago soul. Until now.

You know it’s an unusual opening night when you have to squeeze past Marilu Henner to leave the show. Her presence in the audience was not coincidental; she’d been an undergrad at the University of Chicago when she was cast in a rinky-dink production of a new musical in the old Kingston Mines Theatre, as the first incarnation of Marty. The rest, as they say, is history. “Grease” was set in Rydell High, a stand-in for the Taft High School of co-creator Jim Jacobs’ youth, and the characters and much of the play’s songs and references were inherently Chicago.  And, befitting the story of hormone-raging high schoolers at the end of the fifties, it was raunchy. Jacobs’ partner in grime Warren Casey is no longer with us, but, at the urging and assistance of American Theater Company artistic director PJ Paparelli, who directs this show, Jacobs reconstructed the now-ubiquitous sanitized and Chicago-free “Grease” back to a reasonable approximation of the show that audiences saw that  fateful night in 1971 when it first opened. With tales of the reconstructed, R-rated and Chicago-centric production seemingly everywhere these past weeks, curiosity was certainly piqued. But would it be more than a mere curiosity? 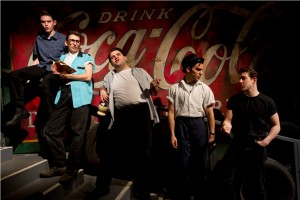 Yes! This is a whirlwind of a show, a breezy two-hours-and-forty-five minutes of youthful energy delivered by a hard-working cast and crew that manage to squeeze everything out of every square inch of Walt Spangler’s packed-to-the-rafters set. Adrian Aguilar is a Danny whose mix of danger and charisma is infectious, leaving no question as to why Sandy would fall for him. And Kelly Davis Wilson, a recent DePaul grad, as Sandy, has the look and the voice to help us forget that Aussie who once epitomized the role. More than the movie, which seemed especially centered on Danny and Sandy’s romance, “The Original Grease” is a balanced ensemble show, and here the entire ensemble joyously delivers. I was especially struck by Jessica Diaz as Rizzo, a perfectly  badass sex kitten, and enjoyed the waistline-challenged warring and wooing of Rob Colletti’s Roger and Sadieh Rifai’s Jan. But frankly, every character sings, literally and figuratively.

Dissecting this show’s Chicago references, not to mention its sometimes so familiar, sometimes so different songs, would provide enough material for a book. But the song arrangements have been stripped of the over-production that too often accompanies them and restored to a solid foundation in fifties rock ‘n’ roll—they sound fresher than ever. A show that I’d remembered  for a certain campiness has been restored to a mature and joyous celebration of coming of age and it’s far more infectious than I expected. If I’d been asked to join a cast member in an on-stage bunny hop after the show, instead of before, I’d have said yes. And embarrassed myself.

In the program notes, board president Jeffrey Morof writes that everyone has a “Grease” moment. Mine is that I, just like the students at Rydell High, was entering my senior year in high school the summer that “Grease” hit the movie theaters and the soundtrack filled the airwaves. I saw the movie on my third date with the woman who would become my wife of thirty years and counting. So I have, as they say, real history with the show. But anyone with an interest in Chicago theater, musicals, Chicago history or fifties music will long regret missing this likely once-in-a-lifetime production. (Brian Hieggelke)