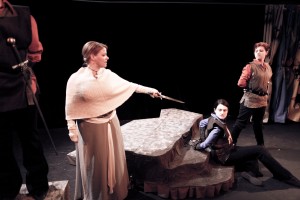 Something peculiar about the German author Friedrich Schiller’s version of the Joan of Arc story is its sense of the supernatural. Throughout most of the play, Johanna is spoken of as a divinely appointed figure working miracles on the battlefield, but you get the idea that she might just be a really convincing public speaker. Then, in the second half, her betrayal in court is accompanied by a noisome thunder, and later she is able to summon the strength to break from her chains of bondage. Suddenly, she is a superhero. It’s one of the play’s many wrinkles that Strangeloop’s production doesn’t quite get.

The show is a hodgepodge of tones, approaches and levels of talent. The modern-dress attire augmented with period pieces seems like a too on-the-nose choice, while the tie-color as alignment motif is too complicated to follow. Everyone seems to be too keyed into their own linguistic rhythms to really listen to each other. The set, though elegant with its curtain of French and English flags, seems versatile until it causes yet another dragging scene change. I almost want to call it an ambitious failure, but no one actually seems to know what they’re aiming for. (Neal Ryan Shaw)