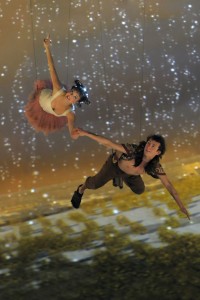 Another “Peter Pan?” Been there, done that, to death, in fact: books, plays, television, cartoons, action-adventure flicks, et al. Happily, this is not just another “Peter Pan” but a contemporary and distinctively British take conceived around London’s Kensington Gardens, the setting where J. M. Barrie was first inspired to create the boy who won’t grow up more than a century ago.

“Peter Pan” has always theoretically been a property for both children and adults, but most versions tip far more to kids—Disney animated version, Spielberg’s “Hook”—or to adults, the Mary Martin Broadway and television version, most Baby Boomers’ first encounter with a transgender character.

What makes this threesixty version effective is that it really does work for both children and adults. And not just as the familiar narrative that “Peter Pan” has now been for generations—and everything we know and love from the story is here—but also as an experience of the story since the production’s dazzling effects are so seamlessly incorporated into the familiar tale.

The setting is a state-of-the-art circus-like tent, a more elegant and more atrium-like version of what Cirque du Soleil has put up for their shows here. The tent itself is actually a theater in the round but with the spectacular addition of the “scenery” being 360 degrees around the action and audience with projected, digital moving images. That’s wonderful enough when you’re in the Darlings’ home or on Never Land itself, which really do come across as elaborate three-dimensional settings. But the real attraction is the shifting and moving images so that when Peter, Wendy and the gang start to fly on suspended wires, we see them against the backdrop of moving scenery of the London skyline, and even going through open gates, etc., until there are only clouds and stars. 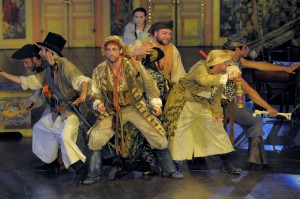 It creates much the same sense of wonder that Lois Lane’s flight with Superman created in the first Christopher Reeve “Superman” film version, right down to the John Williams-like music. The difference here, of course, is that the world the characters are flying through also surrounds us, the audience, in addition to the fact that the characters are suspended three-dimensionally right in front of us. The effects are so dazzling that it is easy to forget that this is an illusion achieved as much by the movements of the actors as the scenery and wires, and a lot of care has gone into their movements. At one point, the characters are even underwater, and in addition to a psychedelic sea, the characters are moving in a manner that actually convincingly suggests real swimming.

Such effects would mean very little taken by themselves, but happily, the acting is also first-rate and holds our interest throughout. Ciaran Joyce is not an androgynous or feminine Peter, but a masculine Peter who really does think, act and resemble a boy. Ditto with the lost boys who are at times edgy enough to be reminiscent of the groundless and ruthless lads in “Lord of the Flies.” Even Captain Cook (Steven Pacey) is as scary as comical, and at one point, slits a man’s throat quite convincingly just so the kids, whose jaws drop at the flying sequences, also will drop their jaws that Peter and crew are in actual danger. Evelyn Hoskins also makes sure that her Wendy has a crush on Peter, yes, but it is a crush, nothing more. And we already start to see her responsibilities deepen that will have her growing up to the point where she will have to leave Peter behind. But in the meantime, she, her brothers and we are in for a wonderful time. (Dennis Polkow)