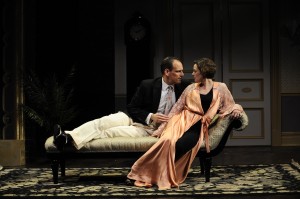 There are few nights more exciting than a world premiere by a leading playwright when the work lives up to its excitement. In a certain way, the audience feels pride of discovery, like we’ve pointed out the future Mozart in the Salzburg maternity ward or something. The opening of “Stage Kiss” was one of those nights, as the talents of Sarah Ruhl are in their finest flourish in a pitch-perfect production at Goodman Theatre.

It takes a certain kind of hubris to mess around with Noel Coward, especially “Private Lives,” but in this farcical comedy of manners, Ruhl reworks major bits of it in a funhouse-mirror sort of way, mixing heavy plot similarities with bits and pieces of theater’s most familiar devices, whether it be the play within the play, the musical as the perfect expression of romance or even talentless eye candy being cast upwards by the (implicit) romantic crush of the director. It’s one thing to mash up theatricalities, but another altogether to write dialogue that sings with as much crafty wit as Coward, and this Ruhl does. For you need know little about what she’s making fun of to have great fun with this work.

“He” (Mark L. Montgomery, spot on as the archetypally self-absorbed actor with irresistible charm) and “She” (the delightfully neurotic yet alluring Jenny Bacon) are cast as the male and female leads in a particularly awful New Haven revival of an old Broadway flop, one where an ailing woman is reunited with a youthful lover. To the surprise of everyone but the audience, the actors cast in those two roles were themselves once lovers and, well, complications of course ensue—especially with this show’s multiple “stage kisses” each night providing the spark. Before long, He and She have rekindled the flame offstage, though it’s never clear to them where the performance ends and life begins. (Amusingly, they stay in costume, in bed, for what seems like weeks after the show ends.) 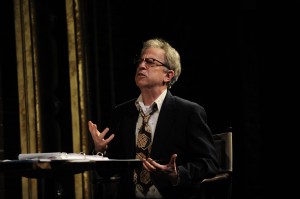 After skewering old Broadway, Ruhl turns to the contemporary theater with equal butchery in depicting a new “visceral” play of uncommon incompetence produced in Detroit, where star actors like to “work” for the authenticity. Todd Rosenthal’s set is a marvel of transformation, with a vast “spartan” backstage gradually winnowing down, as each play progresses toward its opening, into a confining but elaborate set within a set. Jessica Thebus has a special directorial relationship with Ruhl and it’s hard to imagine anyone else delivering a truer production, not to mention finding a cast that, from the leads on down, simply nails each role. (I particularly enjoyed the antics of Ross Lehman’s director and the often hilarious costumes and physical pratfalls of Jeffrey Carlson’s many characters.) Though Ruhl intrigues us with banter about the nature of a stage kiss, about the existence of the human soul and about the differences between reality and artifice, this is not a play heavy with Big Ideas at the Theater. Like the thirties shows it both mocks and adores, it’s simply an uproarious comedy of superlative wit that diverts its audience from the prevailing despair of its times. (Brian Hieggelke)