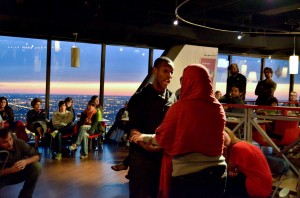 The idea is simple, and kind of ingenious. A cast of actors have all learned lines for a stripped-down version of “R&J,” but the audience gets to vote on who plays what role. What you get is a new sense of freshness and adventure from a tried-and-true play. What you lose is some polish. What you also get are the few actors, who didn’t get cast this go-round, babysitting the crowd and awkwardly coaching the one audience member recruited to play the character Paris to remember to read from the script. It helps that for the most part the actors get the language, know their lines and convey the action breezily. However, sometimes the cut gives way to a couple of unclear transitions, not helped by the cramped playing space of Justin’s upstairs room (the production moves around various venues).

“R&J” just seems a suspect choice for the project. On the one hand, the story is familiar and the rivalry can lend itself to some fun sportsmanship. But, on the other hand, that sportsmanship doesn’t emerge from the performance’s architecture, and ultimately “R&J” is just too mopey to have fun. Given the random-chance nature of the show, though, you might have more luck than this reviewer did. (Neal Ryan Shaw)