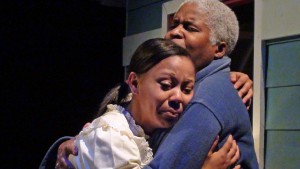 Though it sports a small cast and a short running time, “Freedom, NY” certainly aspires to some big ideas. Taking its inspiration from the murders of a set of Amish schoolgirls, the U.S.-Mexico border disputes and the investigation of an upstate New York justice of the peace, Jennifer Barclay’s new work crams in as many metaphors and symbols of security, tragedy and otherness as she can.

Would that she didn’t burden her three—though game—cast members with conveying so much. As Justice Mayflower, Cheryl Lynn Bruce cuts a dominating figure. Paige Collins as her granddaughter Portia embodies a sad naivete. Desmin Borges’ Gabriel, the Mayflowers’ new immigrant neighbor, is naïve too, but aspirationally so.

The trio’s travails, centered around some unfounded suspicions that Gabriel, the school janitor, has something to do with some missing girls, begin earnestly enough. But once Gabriel adds the eleventh skull to his Dia de los Muertos lawn shrine, and the justice erects an actual fence on the property line, the proceedings become too cartoonish to be taken seriously. (Neal Ryan Shaw)