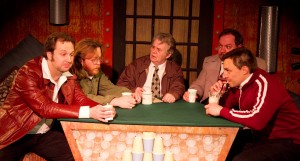 Signal’s moody production about a charming group of ne’er-do-well poker dealers at a struggling casino in Vegas has everything except good writing. Thanks to Ronan Marra’s direction, the ensemble is tight and perfectly choreographed, with expertly coordinated overlapping scenes; and the actors breathe life into otherwise merely sketchy caricatures: the hustler in trouble with disreputable moneylenders, the brothers with an abusive past working through their resentments, a used-up cocktail waitress. But Jon Steinhagen’s script trades so profoundly in cliches, with jokes that consistently fall flat despite the actors’ admirable exertions, that the production is occasionally hard to sit through, particularly its mawkish sin-and-redemption ending. (Monica Westin)