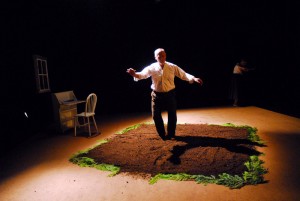 “Sometimes I shy away from the word meditative, ” says Phillip Zarrilli, swiftly disarming the first adjective that came to my mind when thinking how to describe his newest work, “Told By The Wind,” “because it’s so loaded. What’s important in performances is that people are present to what’s happening in that moment, in that environment, with the other people present.”

Zarrilli has been cultivating this kind of deeply nuanced awareness in actors for more than thirty years, using a blend of martial arts and yoga to increase psychophysical awareness and, as the title of his master class at the Dance Center indicates, give the body eyes. “These are things that can complement the usual tools actors use,” said Zarrilli, referring to Stanislavski’s method. “They can take actors into a subtler level of awareness, of co-presence, of inter-subjectivity, of how to be available in space and time. These are material things, they’re not abstract.”

Attentiveness to the moment is the life force of “Told By The Wind,” for performers and audience alike, without any suppositions about meditation per se. The opening image is of a seated woman, only her head and shoulders illuminated, completely still save a slow and repeated turning of her head to the right. In the far background, a figure seated at a small writing table, his back turned three quarters to the audience, can be made out in the half-darkness. To me, the moment may have lasted three minutes or ten; like a good portion of the performance, the opening scene is out of time, leaving ample space for the audience to create their own narrative. The approach, inspired in part by the subtle and poetic Noh theatre of Japan, demands tremendous focus of the performers, in this case, Zarrilli and Jo Shapland, a longtime student of Zarrilli.

Zarrilli himself describes the piece as quiet. There is little text—all of it spoken by Zarrilli—but there is a great deal of visual quietude as well. The set, the costumes, the lighting: all are simple and leave space for the mind to wander, reflect or simply be still and observe. “The aesthetics created are very different from American realism where there’s an aggressive effort to convey meaning,” Zarrilli said. “This piece engages the audience’s attention in a different way—through suggestion, through possibility, through textures.” (Sharon Hoyer)