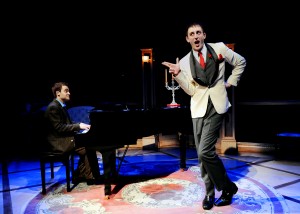 Opening with a surprise party gone awry and a murder to be solved, “Murder for Two—A Killer Musical” (penned by Joe Kinosian and Kellen Blair) quickly explodes into self-aware musical campiness; puns and slapstick abound in a way that would no doubt make Mel Brooks giggle giddily. Officer Marcus Moscowicz (Alan Schmuckler) arrives at the scene of the crime with hopes of becoming a detective and ineffectively strives to corral a host of feisty suspects that includes an aloof ballerina, a gruff psychiatrist, a bickering older couple, a bookish grad student and the victim’s attention-grabbing wife (all played with gusto by Kinosian). The straight-man/funny-man combo works wonders here, with Schmuckler’s earnestness giving Kinosian free rein to send his characters over the top and director David H. Bell has instilled this world premiere with a sense of excitement and experimentation throughout that caters to the show’s irreverent strengths. Those looking to use their detecting skills may be disappointed, but those looking for a laugh will be more than satisfied. (Zach Freeman)