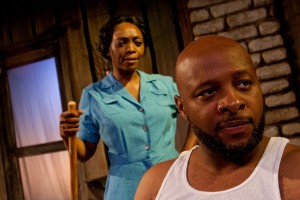 How far will you go to maintain the last shred of your family legacy, even if it means breaking apart that same family? It’s one of the questions addressed by Darren Canady’s new play, which receives a loving if occasionally uneven and bombastic world premiere at Congo Square.

Roy Colton stayed behind to tend his father’s farmland. After seven years of estrangement, his two younger brothers have come to his door with designs on turning the land into an oil-yielding cash cow. All they need is the deed, but Roy refuses to give up what is left of his family’s heritage.

Set in the 1950s, Canady’s script often feels of that time, and it’s hard to get past some of the play’s classic American family drama cliches (the strong, silent husband, the neglected wife, the desperately starry-eyed youth), but you can’t ask for a more tightly constructed plot. James T. Alfred and Shanesia Davis as the central couple stand out in the all-around terrific cast, which also includes a great comic turn by Velma Austin-Massey. Andrei Onegin’s versatile inside-outside set subtly highlights the play’s less explicit examination of public versus private lives. (Neal Ryan Shaw)