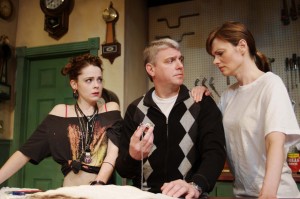 Given its prevalence in film, television and books, it’s somewhat surprising how rare it is to see new plays incorporating science fiction and fantasy. Though special-effects challenges no doubt play a part, I suspect the reason is more a case of topical snobbery, never mind that Shakespeare routinely worked witches, ghosts and other magical creatures into his works. So Marisa Wegrzyn’s Wendy Wasserstein Prize-winning “Hickorydickory,” in its world-premiere production at Chicago Dramatists, works from a rather refreshing premise. Humans, it turns out, unknowingly have a “mortal clock” inside of us—a personally engraved pocket watch—set to the very minute of our inevitable death. For the family of multigenerational suburban Chicago watch smiths who secretly specialize in mortal-clock repairs, this provides ample fodder for family drama and musings about the nature of life and fate. And the processs of removing wayward clocks from the head brings a real splatter of gore to the stage. For most of this three-act, we’re captivated by the story: what horrible fate befell shop owner Jimmy’s parents? What does daughter Dale know about her perhaps-impending death? And how did Cari Lee manage to find eternal youth and, in doing so, turn out so annoyingly 17? Director Russ Tutterow’s assembled a crackerjack cast—Thomas Gebbia oozes energetic empathy as Jimmy, as well as his father Richard in the flashback second act; Gail Rastorfer is perfectly earnest as the perfectly earnest Kate and cryptic as the cryptic Helen; Cathlyn Melvin masters the combination of nihilistic teenager and nerdy teenager, respectively; Tyler Ross charms whether he’s playing the inexplicably Irish shop apprentice Rowan or Young Jimmy; and Joanne Dubach lights up the stage as the eternally giddy-as-a-schoolgirl Cari Lee. Somewhere in the second act, though, the play gets a bit bogged down under its longer-than-normal running time and need for substantial exposition to communicate the plot mechanics. But there’s something to be said for the timeliness of contemplating the mysteries of fate the night before The Rapture left me behind here on earth. (Brian Hieggelke)