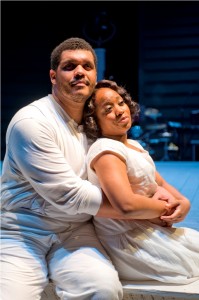 Despite the cultural issues and problems engulfing “Porgy and Bess, ” and they are myriad, the principal reason it survives is George Gershwin’s sumptuous score. By and large, it is faithfully rendered in this streamlined and minimalist Court Theatre production by a talented group of singing actors who have obviously in each and every case really upped their game to an entirely new level.

Of course, those used to the complete work in full score will have a lot to miss: entire characters, scenarios and musical bits that flesh out Catfish Row are AWOL here. Most of the beloved songs are here, to be sure, although the iconic “Summertime” has been given a lower key in the opening scene and tilted towards its jazz standard polarity rather than rendered as a sumptuous aria.

Such changes are distracting, at first—almost like Aretha Franklin singing Puccini’s “Nessun dorma” or a Handel reconfiguration such as “The Gospel Messiah”—but on its own terms, it does work. Likewise when Bethany Thomas starts her funeral cry of “My Man’s Gone Now,” she does it an octave lower in a restrained, poignant almost Billie Holiday-like manner rather than the all out take-no-prisoners loud lamentation as written. The overture is omitted at the beginning of the work, but somehow mysteriously pops up in the rape scene, albeit at a snail’s pace.

The fifteen-member ensemble does sound understandably thin in the big choral numbers, some of the cast confusing loud singing with full and focused singing. Gershwin’s orchestration has been reduced to a sketch score that features an “orchestra” of six spotlighting Doug Peck’s wonderful piano playing with bass and drums as its default setting, augmented by a one-player-per-part string section (violin, viola), woodwinds (flute and clarinets), brass (trumpet) and a drummer who takes up tuned percussion, bells, et al, as needed. 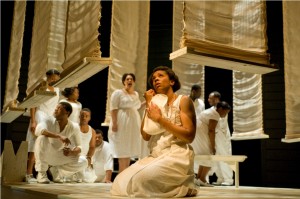 The biggest texture problem is the sustained sonorities that actual sections, however small, would give the work, which are really needed and sorely missed for the recitative and aria sections. Lyrical moments such as “Bess, You Is My Woman Now,” for instance, would immensely benefit from enhanced, even if synthetic, string sonorities supporting the all too naked single string player. Ditto for brass, woodwinds, et al.

And couldn’t someone, even a cast member, pick up a banjo for “I Got Plenty o’ Nuttin?” It is a very easy part and its absence a void. Perhaps a bluegrass “Porgy and Bess” where cast members played guitars, mandolins and other folk instruments of the region? And a Leslie speaker would really bring the use of the Hammond B-3 organ to life in the couple of scenes where it is used.

The bare-bones set itself is completely white, and all cast members—with the exception of the one catch-all white character who is attired in gray—are all wearing white. And we’re talking sparkling, dazzling, “Hollywood Palace,” “Donny and Marie” white. Even Porgy’s crutch is white, it all almost hurts the eyes at times. Other than becoming an issue when Porgy mentions how good Bess looks in a red dress, it does have the practical effect of all of this coming across as a truncated modern concert performance, putting the proceedings beyond time and place, despite the work at least attempting to portray a specific time and place, the Gullah district of South Carolina, circa 1925. (Dennis Polkow)