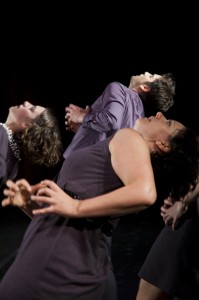 Molly Shanahan finds new territory in this latest iteration of the “Stamina of Curiosity” project, namely the entry of aggression into her highly sensitive universe and its co-existence with the charged vulnerability of her performances. The language is the same—playful, elemental movements that seem generated by a greater brain of the integrated body; negative space between dancers charged positive, palpable as bodies—but the framework has changed. An awareness of our very yang, masculine culture is referenced directly in a score peppered with iconic ranting monologues from “Glengarry Glen Ross” and “A Few Good Men”—language playful and seductive as Shanahan’s work, generated at the opposite end of the energetic spectrum. Shanahan told me she found an intersection of vulnerability and aggression in the image of sharks, animals that depend on fluid, undulating movement for survival—a movement that adds to their terror in the human imagination. She states, “It fascinates me, the idea of survival being linked to adaptability and flow and that adaptability and flow being perceived as dangerous.” There’s a lot here and this is the last chance to see it before the “Stamina” project moves on. (Sharon Hoyer)