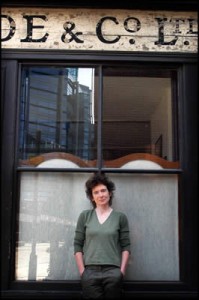 Producing company New Leaf Theatre is perhaps as notable for its one-off space as its consistently fiery but meticulous performances that have marked them as easily one of the most exciting storefront theater companies in Chicago. Their long-term residency space at the Lincoln Park Cultural Center is an old auditorium that feels like a ballroom, with wood paneling, a chandelier and an odd location in the park right next to the zoo. In this space they have put on devastating, gorgeous performances in both a proscenium and promenade setting, making a lot out of a little and pushing the limits of what storefront theater can do.

This summer, after landing one of the coveted spots at the city’s DCA Storefront Theater downtown, they’re planning to do even more: in artistic director Jessica Hutchinson’s words, a “big sweeping epic monster show” that uses up all the space and flexibility the DCA space provides. For example, the play they’re doing has a lot of imagery from the ocean and “the feeling of being very small in a very big world,” according to Hutchinson. “So we’re going to work with physical distance and height.”

“Lighthousekeeping,” the play written by Jeanette Winterson and adapted by Northwestern performance studies grad Georgette Kelly for the stage,  is set in Cape Wrath, Scotland, a real and very harsh, isolated location with a lighthouse atop a completely sheer cliff down to the ocean. The show follows the life of a young woman named Silver who is doubly orphaned after the death of her mother and apprenticed to a lighthouse keeper just before the lighthouse is automatized. The lighthouse keeper teaches her through stories about the town’s past—including a character named Babel Dark who may be an inspiration for Jekyll and Hyde—before he disappears, and Silver has to figure out what to do next.

With an ensemble cast weaving between the 1860s and the near-present day, the company aims to make Winterson’s high-modernist fable about storytelling and love reflect universal feelings of “finding ourselves in moments in our own lives of trying to figure out what to do next,” Hutchinson says.

“Lighthousekeeping” runs at the DCA Storefront Theater, 66 East Randolph, from June 8 to July 17.