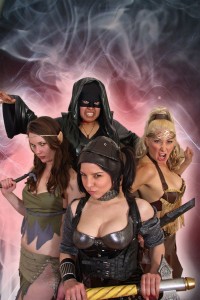 On the heels of similar “Glee” and Mario Brothers themed shows, this latest installment of boob-centered nerd comedy from creator/director MsPixy follows four buxom broads on their quest to reclaim the Icosahedron of Destiny from the evil Dragon Bitch. Led by a captivatingly droll narrator/dungeon master, the audience follows the group from town to forest to mountain as they face werewolves, warlocks, faeries and even the monster spider Shelob. Luckily, confrontations with these voluptuous villains typically result in clothing removal rather than bloodshed. Fantasy is a broad category and the script takes aim at everything from “Harry Potter” to “Labyrinth” to Leeroy Jenkins, resulting in a less-focused lampooning than previous Geek Girl Burlesque outings. But for the most part the jokes hit their mark with elfin accuracy, and the burlesque numbers (including a lascivious plant, a fiery dragon battle and an alluringly lit spiderweb escape) showcase how comedy and striptease can unite to the betterment of both. A tipping wench is always on hand to collect “tip points” for leveling up, so bring some dollar-dollar bills ya’ll.  (Zach Freeman)