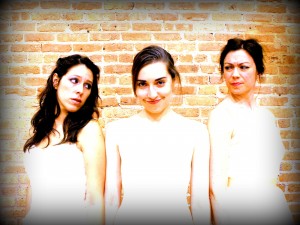 Charles Mee’s—without exaggeration—genius adaptation of Aeschylus’ “The Suppliants,” a play about fifty sisters who flee Greece to avoid being married against their will to their cousins, modernizes one of the world’s oldest plays and teases out provocative truths about justice, love, power and romance, embodied in archetypal figures, while somehow avoiding anything close to cliché. Chicago Fusion Theatre’s production, directed by Nilsa Reyna, matches the strength of the play with an exuberant, witty, often hilariously campy and utterly romantic stylized production. The cast is energetic and utterly compelling, with David Mitchell standing out as an over-the-top queen in the making, but comedy is consistently counterpointed by remarkable poignancy, in particular a stinging monologue by John Taflan about the fictions of masculine violence. (Monica Westin)

At the Royal George Theatre, 1641 North Halsted. Through June 25.