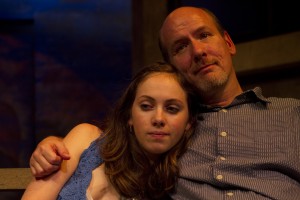 An earnest young clerk in 1901 is hubristically determined to convince the chaotic city to adopt his grid system,  while his pregnant wife contemplates abandoning the urban life altogether; a father meets his daughter at Navy Pier on the eve of her college decampment to say farewell and more—the tourist trap holds both tender memories of visits to the Chicago Children’s Museum as well as lessons more historical and metaphorical; a couple of buskers scuffle for territory at the Logan Square Farmer’s Market.

It’s a compelling premise—enlist twelve playwrights and directors to craft twelve short plays set in different Chicago zip codes, and it more often than not lives up to its promise in execution. Those that work best, the aforementioned three by Marisa Wegrzyn, Robert Koon and Laura Jacqmin, along wth Brian Golden’s post-coital coffeehouse encounter and Brooke Berman’s spot-on riff on vintage shop attitude, generally use their settings organically, without making them the center of the story. The least successful suffer from trying too hard with their settings or, in a couple of cases, fail to bring any real coherence at all to their stories. Unfortunately, when that happens, it’s most often in Program B—you can see both together or either program separately and I’d recommend Program A—bringing an often-engaging evening to a close on a flat note. Taken altogether, though, the work crafts an engaging and diverse narrative about our city, and “co-coordinators” Brian Golden and Cassy Sanders do a nice job of creating little bits of “business” between each story to stitch everything together. (Brian Hieggelke)