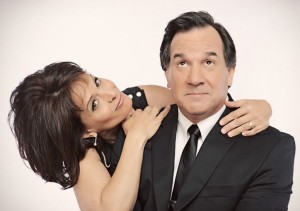 Paul Barrosse always intended to return to Chicago, the place where he made a name for himself in the 1980s creating improv comedy revues while helping found the Practical Theatre Co. When the group—which for a time in the early part of the decade rivaled Second City as members like Brad Hall, Julia Louis-Dreyfus and Barrosse himself all landed gigs on “Saturday Night Live”—closed its last show in 1989, its members were scattering across the country with other career obligations. Still, Barrosse knew it was just a matter of time before he found himself back on Chicago stage.

Turns out, it would be twenty-two years.

“It’s like anything, we always intended to do it, there just comes a time where you turn around and go, ‘Oh my God, it’s been twenty years,’” he says.

Barrosse, along with his wife and fellow Practical Theatre alum Victoria Zielinski, is returning to Chicago for the first time since leaving for Los Angeles in 1990 with “The Vic and Paul Show.” It’s essentially a return to their Practical Theatre manic oddball roots, but is now mixed with the experience and worldview of adulthood.

“When we were last seen in Chicago, we were young people with an entirely different perspective, in terms of what our day-to-day concerns were, and our view on life and relationships,” Barrosse says. “The show we’re doing now is a logical extension of what we were doing at Practical Theatre back in the day. That comic sensibility, matured, but not losing any of the passion or excitement for being on the stage.”

The last two decades have treated the pair well. They’ve both found success in television, most notably working for VH1’s “Behind the Music” and most recently, TLC’s “Little People, Big World.” Now, in the second half of their careers, the couple has been working their way back to where they started, with the DIY sensibility they had coming out of college in the late seventies.

“It’s definitely a different show, but in a way I think it’s one of our better shows we’ve written from top to bottom. We’re more excited than ever to be doing it.” (Alex Baumgardner)

“The Vic and Paul Show,” runs from June 9 through June 12 at the Prop Theater, 3502 North Elston. For ticket information visit www.brownpapertickets.com/event/169351.