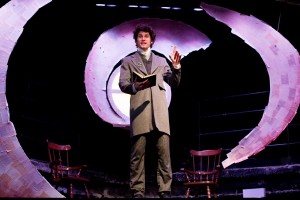 This new adaptation of Jeanette Winterson’s novel is chock full of metaphors. With personal and place names like Silver, Pinch, Babel Dark and Cape Wrath (a real place, admittedly), you could almost make a drinking game of the play, taking a swig each time a metaphor is given expression. It’s to the credit of adapter Georgette Kelly and director Jessica Hutchinson that the ambitious show never feels overstuffed or overblown.

Silver narrates her story as a Scottish orphan girl apprenticed to a blind lighthousekeeper and as an adult constantly in search of the light that defines her life. The play traffics in stories, a series of “endless beginnings,” and it’s easy to get lost in the complex narrative that numbers Charles Darwin and Robert Louis Stevenson among its cast of characters. But Hutchinson’s staging is elegant, evenhanded and clear, and Tien Doman as the adult Silver is a sympathetic narrator. The show is a beautiful call for unabashed, wide-eyed optimism in the face of darkness. (Neal Ryan Shaw)