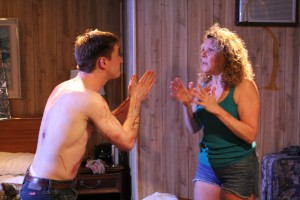 This is black box theater at its best: gripping, claustrophobic and all too real. Tracy Letts’ play famously debuted at A Red Orchid with Michael Shannon ten years before being adapted into a film, but Redtwist completely owns this production. When a hard-living, lonely waitress (Jacqueline Grandt in yet another extraordinary performance) living in a seedy hotel finds something like love in an itinerant who claims to have been a victim of military testing, what begins as atmospheric naturalism quickly becomes a descent into suffocating paranoia and Grand Guignol horror. But what makes Letts’ play so remarkable is that all the moments of skin-crawling creepiness are second only to the real terror of how desperate people can be for intimacy. Directors Kimberly Senior and Jack Magaw expertly balance psychological realism with madness and drug-addled self-destruction. The technical theater deserves a special mention, with Redtwist’s tiny black box transformed into the suffocating space of the hotel room, and an elaborate soundscape that never once lets up its immersive grip. (Monica Westin)