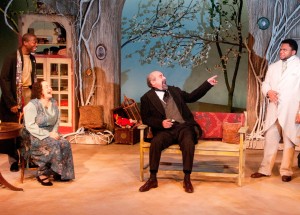 Ranevskaya (JoAnn Montemurro) returns to her heavily indebted Russian estate, too enraptured by her lovely cherry orchard to acknowledge her financial overdraft. She continues to rebuff the moneyraising suggestions of Lopakhin (Frederick Harris), living in the past until time runs out.  Daughters Varya (Helen Young) and Anya (Sophia Menendian) have their eyes on various suitors, only to be disappointed. It’s a world of inertia.

Andrei Onegin’s lovely vine-covered set suggests a life overgrown by a callous world but the ensemble fails to capture the bittersweet nostalgia and frustrating lack of action the characters are mired in. While Michael Menendian’s direction insists on livable pacing, it doesn’t seem to scratch the piece’s emotional surface. (Lisa Buscani)