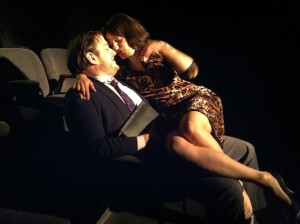 There are many moments in Gaetano Marangelli’s new play in which characters recite to each other entries from an English dictionary. You would think that such scenes would spell instant death, but there’s something about their exhaustiveness that ultimately compels. Hearing the etymology of a word like “venereal,” for instance, is like an elixir for lovers of  language. Would that the rest of the play were as dramatic as those readings, where in fact it is too verbose for its own good. Sofonisba, a failed, emotionally unstable Italian actress, hides away in her Brooklyn apartment still obsessed with her separated husband, a renowned poet and scholar. Their son tells her that his father has died, but she doesn’t believe him. The play is written with a rapacious wit, which the actors, especially Aemilia Scott as Sofonisba, are all too happy to indulge. Scott’s exuberant, buoyant Sofonisba is indeed the play’s only other saving grace, hemmed in as she is by Brendon DeMay’s flat performance as her son George and Ed Flynn’s decidedly uncharismatic Stephen, the mythical husband. I never looked forward to dictionary recitations so much. (Neal Ryan Shaw)

Well, I thoroughly enjoyed this play and the many layers of interpretation it opened up for us, the audience. The dictionary — one of the major symbols in this work — was the drug by which Steven lured his bride. Its recitation throughout the play — as an elixir of love, a soporofic — communicated the addiction Sofonisba has for Steven. For love of him and the world he brought her to, she gave up her identity — “birth certificate, divorce papers, and marriage license.” The tragedy is, she fails to see what she has become Through the words she… Read more »