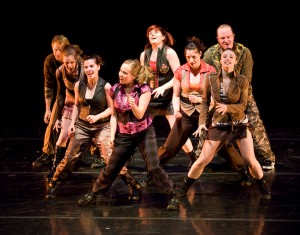 With his history as a drummer and English major, his equal love of Gershwin and James Brown, and his penchant for using—seriously using—shared- and counter-weight (that is, swing/Latin/Lindy/folkdance) partnering in his choreography, it’s no exaggeration to say I find Billy Siegenfeld a kindred spirit. Of course, his warm, energetic demeanor helps too. The founder and artistic director of the Jump Rhythm Jazz Project is lively and verbose and carries himself with the openness and invitation that his trademarked technique promotes… but more on that in a moment.

Last week, I visited a JRJP rehearsal in a small studio in Rogers Park. They were rehearsing a new number, a reworking of an antiwar piece created around George W. Bush’s reelection, originally called “The News From Poems” (title taken from a William Carlos Williams poem), now entitled “There Never Was a War That Was Not Inward” (courtesy Marianne Moore). After rehearsal, Siegenfeld told me why he chose to dramatically rework the number. “Time goes on and we’re still at war and now we’re at war in a second country and a third country and a fourth. I was feeling riled up and maybe even a little resigned and decided to make it about what makes people crazy,” he said. “This state of being prepared for war is a numbed state. I started reading a lot about PTSD. I’m so distraught over war, but more distraught over the state of mind that people get in that allows them not to question it.”

“There Never Was a War,” like most of Siegenfeld’s work, tells a story using jazz standards and a characteristic blend of tap, jazz and musical theater-derived movement. Dancers in civilian dress sing portions of songs by Cole Porter and Marc Blitzstein to comfort one another; in a militaristic section, they don bandanas and tap and stomp fiercely to Outkast, grunting with rage. This blend of voice—sometimes singing words, sometimes scatting—and body working together as a percussive instrument is the signature of the now twenty-year-old Jump Rhythm technique. Siegenfeld says, “I wanted to create a technique that taught the body how to make and sing rhythm. I was hyperkinetic as a kid and a drummer and this was the music I loved.” 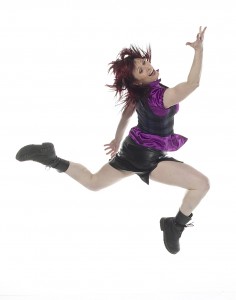 At one point in the interview Siegenfeld mentions that Jump Rhythm is not a popular point of view. I ask what he means. “This is a technique based in the vernacular body. Even though, if one concedes that Fred Astaire or Fayard Nicholas look elegant, then it has its elegance, but it’s an elegance that comes out of natural posture; it’s not imposed.” He stood up to demonstrate, feet shoulder-width and parallel, knees unlocked, shoulders and chest relaxed. The posture is intrinsic to martial artists, breakers and tap dancers, but Siegenfeld has challenges teaching it at Northwestern to generations of kids who take ballet as law. “I ask, ‘Can you be strong this way? This is 300,000 years old. This is how you survived: this is how you picked fruit, this is how you hunted, this is how you hugged people, this is how you copulated. This is the body: it has its organization.’”

In this way, Jump Rhythm is not simply a movement technique for Siegenfeld, but an overarching philosophy. During our conversation he makes references to the political, social, psychological and gender implications of the posture our parents taught us (i.e. “standing up straight”): its rigidity, its elitism, its quantitativeness—the same quantitativeness that motivates our imbalanced economy and fuels our disregard for our environment (not many choreographers would invoke Thoreau in an essay on the value of being physically grounded). Siegenfeld is a conservationist and sees a direct correlation between internal and external wastefulness. In his essay “Standing Down Straight,” he concludes, “Ultimately, Jump Rhythm offers a way of moving that allows students to benefit fully from what evolution has granted. Guided by its call to give one’s weight to the supporting earth, they learn that the qualities of strength, beauty and confidence can be found as readily in focused relaxation as in regimens of muscular overuse.”

There’s something incredibly affirming and egalitarian about this philosophy of movement; relaxed, grounded motion is available to anybody and so the technique validates the power and capability of every body. This spirit is a large part of what makes JRJP shows so likeable; there’s a familiarity, not just in the Isley Brothers and Gershwin tunes, but in the playful, slangy, relaxed language of the movement itself.