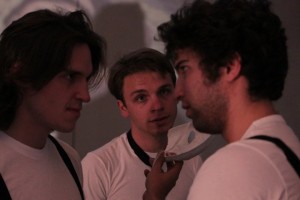 Milk-plus. Droogs. A bit of the old ultraviolence. Beethoven’s Ninth. These things are recognizable to anyone who has either read Anthony Burgess’ classic dystopian 1962 novel or seen Stanley Kubrick’s memorable film adaptation. If you’re a member of the uninitiated, DreamLogic’s promenade-style production of Burgess’ own adaptation might make you wish you were more familiar with the tale of Alex, a rebellious teenager put through the ringer by an uncaring futuristic bureaucracy. If some story elements remain obscure, however, the peripatetic show manages to keep the audience engaged for most of its duration. Director Scott McKinsey uses the eerily evocative futurist Rotunda building to full effect—the show’s overall design recalls a 1960s sci-fi film without necessarily conjuring Kubrick’s. The show moves briskly around the circular structure between set pieces, some of which recall art installations, and interactions are smooth enough that you never feel like you’re in the way or discouraged from moving around for the best viewing angle. In such a cavernous, sometimes echoey space, though, the show wants for more sophisticated, polished performances from its cast. Barring that, you might be shocked by “Clockwork”‘s provocations, more than moved to reflect on man’s role in society. But that doesn’t mean you didn’t have a good time. (Neal Ryan Shaw)

Dreamlogic Theatreworks at the Rotunda, 1603 Orrington, Evanston. Through July 2.