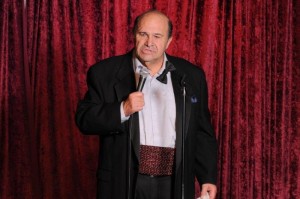 Jim Geoghan’s 1988 play reminds us that comedians—those purveyors of laffs, those kings of the one-liner—are, for all their clownishness, underneath it all tortured, miserable souls with giant chips on their shoulders who are just as much about the “business” as the “show.” Emergent Theatre calls in a ringer or two to land this funny, somewhat demented first production.

The play concerns Jackie Dwayne, an aging Catskills comedian who hasn’t seen the limelight since the days of Ed Sullivan, and a young, up-and-coming comedy duo, all of whom dream of performing on the Buddy King Show. Not so much plot driven for its first act, the show attempts an examination of the psychological and emotional terms of a life in comedy.

Veteran actor Bobby Costanzo brings some delightful old-school talent to the stage as Dwayne, and Jim Saltouros and A.J. Miller as the comedy team on the verge commend themselves well (although Saltouros is too old to be a young comic). Eustace Allen and Ken Bradley round out this solid cast, who really kill when they get on a roll riffing and bouncing. However, the play takes an unfortunate misstep when it forsakes the edgy comedy and devolves into a typical backstage farce, and the late 1980s misogyny can occasionally grate. (Neal Ryan Shaw)