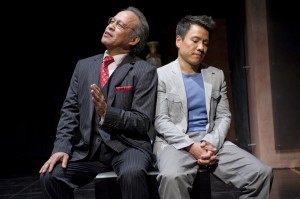 I recently heard the author Stuart Dybek address a small assemblage at the Energy BBDO ad agency, where he spoke at length about the labeling of narrative, and said that he was at work on a “fictional memoir.” The stories he was including really happened, at least as he recalls, but the label “fiction” gives him license to serve the narrative rather than to adhere to some idea of objective truth. This came to mind watching the captivating and hilarious production of David Henry Hwang’s “Yellow Face,” now in its Chicago premiere at Silk Road Theatre Project (in association with Goodman Theatre, which is working with the playwright on the world premiere of “Chinglish”). In “Yellow Face,” the playwright makes himself the central character, “processing” a decade or so of dramatic developments in his life and seemingly stymied career as a playwright in the wake of his breakout success with “M. Butterfly.” He takes us into his outspoken protest of the casting of a white actor, Jonathan Pryce, as an Asian character in “Miss Saigon,” and through Hwang’s folllow-up to “Butterfly,” the Broadway flop “Face Value.” Soon, Washington in the late nineties seemed to be undertaking a McCarthyish witch hunt for Chinese Americans, and Hwang’s father, a successful immigrant banker who’d been a walking billboard for the American dream, was being dragged down. Through all of this, a running exploration of the nature of race, and “face,” is being explored in ways both overt and subtle, as well as a subtextual exploration of the nature of objective truth.

Hwang portrays himself as an often-unflattering character—in one scene he visits an “adult” shop in search of porn, for example—especially as someone susceptible to various degrees of hypocrisy in his personal and professional life. This intelligent complexity of characterization carries over, I thought, even to the New York Times reporter who wrote the exposé of Hwang’s father and many of the other stories that advanced the government’s Chinese-American “witch hunt,” notably the case of the scientist Wen Ho Lee. In depicting a meeting that may or may not have “actually” happened with the reporter, who claims to work without an agenda other than the truth, Hwang exposes not only the reporter’s manipulations but also his biases, and does so in a way in which audience members might recognize their own complicity. And yet, Hwang hangs his whole story’s progression on newspaper headlines that advance the narrative and establish the idea that we’re watching nonfiction… or are we? There is so much nuance and device at work in this play that the whole thing could easily become a trainwreck, but it’s a testament to the strength of Hwang’s writing, Steve Scott’s assured directing and the multitalented cast—especially the energetic David Rhee as DHH—that it instead turns into one of the finest rides I’ve had in the theater in a long while. (Brian Hieggelke)