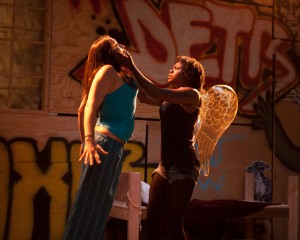 Playwright Jose Rivera once studied with author Gabriel Garcia Marquez and it shows; “Marisol” is saturated with the magical realism Marquez is famous for. Rivera’s serio-comic poetry makes terrifying celestial warfare just as believable as the cruelty New Yorkers inflicted on each other in the early nineties.

Director John Mossman makes creative use of Aaron Menninga’s graffitied set; the performances are broad but the script demands it. Evans’ wide-eyed fear and plucky bravery is affecting, while Collins and Brandon Thompson nail the comic relief. The piece wallows a bit too long in degradation, but leaves room for hope. (Lisa Buscani)