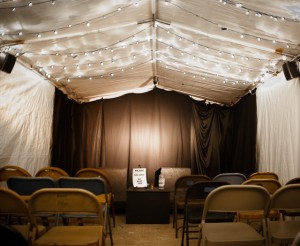 If you enjoy the loose vibe at Second City shows—the cocktail-lounge atmosphere, the audience-performer interaction—then you might just love the shows being produced in a Pilsen backyard by the Southside Ignoramus Quartet (SIQ) on June 25, July 9 and July 16. SIQ offers all the trappings of a great North Side show—special guest comedians, improv sets based on audience suggestion and sketch comedy—from the backyard of the South Side, in the comfort of a fully equipped and air-conditioned tent.

Founder David Pintor, a Pilsen native, discovered at the Second City Conservatory that South Side humor “didn’t always fit in with what you see with groups on the North Side.” His fellow students were often unsure how to react to characters drawn from the people of his neighborhood. In response, Pintor says, “I started training people and started my own group here.” Inspired by his father’s stories of traveling theaters in Mexico, he scraped together the money for a tent and equipment, he and his father built the stage and SIQ saw its first performance in June 2010.

“It’s not just about the South Side,” he says. “It’s also a social-economic issue, and also the accessibility of this type of theater to the South Side.” He hopes that SIQ will foster an appreciation for theater in his own neighborhood, and that appreciation will lead to more groups of this kind.

At the end of the day, though, SIQ is about the performance, and Pintor promises a good show. “I did it this way to create, almost for a brief moment, an alternate reality—create some type of magic people could walk into, have an experience, and walk out.” (Erin Kelsey)

For more details or ticket information, check out their Facebook page here.