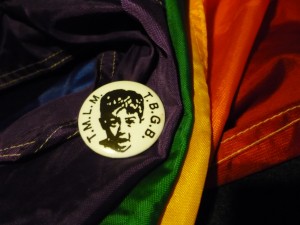 The first time Jay Torrence ever heard a man say he was gay was during a performance of The Neo-Futurists’ “Too Much Light Makes the Baby Go Blind” (TML) when he was in college. “It was really affirming for me to hear personal stories from their lives about how it felt to be gay in the eighties.” he says. Torrence joined the Neo-Futurists ensemble in 2002, and has since contributed his own personal stories on LGBTQ issues. This year, Torrence and fellow ensemble member Megan Mercier were responsible for curating the yearly Pride themed TML, called “30 Queer Plays in 60 Straight Minutes,” which performs this weekend.

While to the audience member the Pride show may seem very similar to TML, creating the show is a very different experience for the Neo-Futurists. Typically, TML performances change from week to week as ensemble members add new two-minute pieces to the “menu” of those to be performed. For the Pride show, the curators tailor the menu to the audience. “We balance our topics and tones,” Torrence says. “We go through our archives and see what we have from that year, and sometimes go back even further.” While many pieces selected originally featured homosexual themes, the curators are willing to experiment. “Sometimes,” Torrence says, “we approach the menu and look for heterosexual topics and then gender-bend them.” This process—similar to how they create their touring shows—results in a menu of their strongest material.

This year’s beneficiary is the Illinois Safe Schools Alliance, an organization committed to supporting LGBTQ youth in Illinois schools and communities. Typically, ensemble members propose organizations to receive the proceeds of the event and one is selected by vote, but this year was a little different. “It was unique in that the Alliance contacted us because they’ve heard about our show,” Torrence says. The ensemble found the mission of ISSA to be particularly appropriate: “We think it’s an important year for queer youth because of all the teen suicides, so we think it’s really important to support them—very timely.”

In turn, the ISSA wanted to recognize the years of support the Neo-Futurists Pride shows have provided to the LGBTQ community. “When ISSA contacted us, they acknowledged the work we’ve been doing for the queer community for years, and that was really great. They wrote us a letter and said, ‘We are really proud of your company for being so proactive and doing this outreach to other organizations.’”

The personal nature of The Neo-Futurarium is what makes shows like “30 Queer Plays” so resonant with audiences and LGBTQ organizations, Torrence thinks. “This was the first job I ever had where I felt it was positive to be a gay man,” he says. “Theater and art are great in that way, but our theater in particular because it comes from such a personal place. You write from your own life and you write stories about who you are.”

While most college students today probably do not need to attend TML to see their first frank presentation of LGBTQ issues, the Neo-Futurists continue to celebrate the community. “I’m proud of our progressive history,” Torrence says. “We have a political focus and social consciousness to our work, which has always aligned in a great way with the gay movement and queer politics.” Pieces in the show, he says, “celebrate us outright, challenge our perspectives or hold us accountable. It’s a dialogue that’s occurring and we force it onto our stage and keep that voice present.”