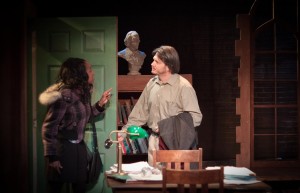 Muddled accents and a striking lack of chemistry take a lot of the zing out of this poignant and often hilarious exploration of class, culture and education by British playwright Willy Russell, in which Frank (Brad Woodard), a cynical, booze-addled professor is assigned to tutor Rita (Whitney White), an effusive hairdresser seeking to improve her life via higher education. Like any two-person script, “Educating Rita” relies heavily on the evolution of and the relationship between the characters. Over the course of the show, as Frank and Rita meet repeatedly in his shabby academic office (perfectly imagined by scenic designer Chelsea Warren) and the number of missed connections between the actors mounts, the two-hour-and-forty-minute running time begins to feel especially lengthy. The drawn-out scene changes don’t help. Tightening the pacing and injecting a healthy shot of urgency into the proceedings might bring out some of the excitement in the story. (Zach Freeman)

Whitney White is superb- a force of nature as she displays subtleties of class that US audiences see far too rarely. The second act snaps with energy as the student becomes the teacher and the intellectual becomes the mope. Far from slowing the production, the costume changes provide a separate narrative of the hair dresser’s metamorphosis into the snooty sophisticate.