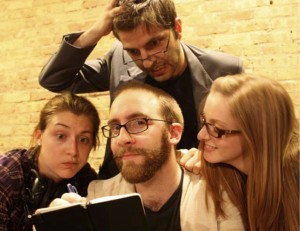 Nothing Special’s latest is Luigi Pirandello on anti-depressants. Characters jump out of their stories and change their destinies, but unlike Pirandello, everyone gets the happy ending they want. Or at least, the ending they deserve.

X (Brian Rohde) changes his character’s storyline, much to the chagrin of the Playwright (Volen Iliev). He changes jobs and swaps love interest Christine (Amanda Roeder) for Lily (Allie Kunkler) and gives a name and purpose to best buddy Max (robust  fratboy Cale Haupert). The evening is conducted by an omniscient but unsatisfied Stagehand (Celeste Burns).

Gwydion Suilebhan’s script ultimately runs out of steam; the joke doesn’t have seventy-five minutes in it. But the ensemble’s game; Robert Quinlan’s staging is fast-paced and seamless. On-the-cheap props add to the show’s scruffy humor. Burns’ grumpiness is a hoot; Rohde and Kunkler’s charming repartee forces the audience to root for their storyline. It’s setless, barebones meta with heart and smarts. (Lisa Buscani)

Nothing Special Productions at The Strawdog Theatre, 3829 North Broadway, brownpapertickets.com.    Through July 20.