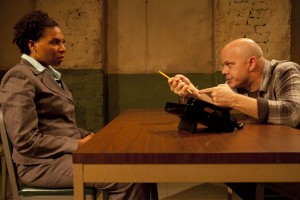 It’s a gritty cop drama set in Chicago, but Joshua Rollins’ new play has more in common with “The Shield” than “The Chicago Code.” Steve Pickering plays Landy, a police detective—looking a lot like that bulldog Michael Chiklis—searching for his missing former partner, Lucy, a vice cop undercover as a prostitute. He enlists the aid of another former partner, now an internal affairs officer, Goggins, and together they sweat out William, the straight-laced family man who was last seen with Lucy.

The script is not without its few police procedural cliches—hard to resist, I imagine—but Rollins has crafted satisfying journeys for his characters even if not for the investigation itself. Strong performances anchor this play, in particular those by Vincent Teninty (the newly installed artistic director of Pine Box following its three-year hiatus) as William and Karen Aldridge as Goggins, who has a monologue about the seemingly insignificant moments that can change a life irrevocably that defines the show. Director Matt Miller and team have a fine piece of theater here. (Neal Ryan Shaw)