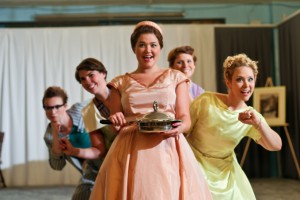 Light fare, but delicious. Expanded by Evan Linder and Andrew Hobgood from a short Sketchbook piece, New Colony’s created a surprisingly engaging, though mostly absurdist, play about a group of 1950s semi-closeted lesbians in the “Susan B. Anthony Society for the Sisters of Gertrude Stein” who all come out during a nuclear apocalypse that occurs during their annual quiche breakfast. The five ebullient actresses worked to create their own roles, resulting in a mix of imaginative characters that transcend stereotypes; and for every tasteless joke about woman-on-woman action, there are a number of clever narrative twists, metatheatrical winks and surrealist conceits. Paced at a vigorous seventy minutes, with PBR on tap, the show never demands more than it gives. Your relationship with quiche will never be the same again. (Monica Westin)