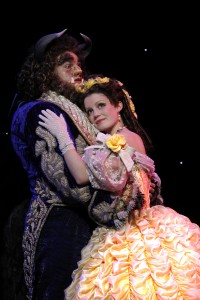 First, the bad news: this non-Equity touring version of “Beauty and the Beast” at times feels rather flat in its energy and timing. It often seems like the performances are being called in and that comic lines and gags, for instance, feel forced and are being laughed at more for the sheer familiarity of the material than for the spontaneity of their delivery.

But there is also good news: while the couple at the heart of “Beauty and the Beast,” Emily Behny’s Belle and Dane Agostinis’ Beast, separately turn in quality performances, this is one of the only times that together the couple has the chemistry of, well, a couple. You actually buy that the pair are falling in love and that doing so has a transformative effect on the Beast. All of this feels organic and like the real deal rather than the more often than not artificial pretense of most incarnations of this production.

That, taken with Alan Menken’s superb score and the colorful costumes and sets do make this more of a plus than a minus. And children being exposed to Menken’s songs in any way, shape or form will only increase their appetite for good show music in the long run. But taking children familiar with the songs from the animated version to the live version of “Beauty and the Beast” can also be viewed as an investment in their theater-going future. (Dennis Polkow)