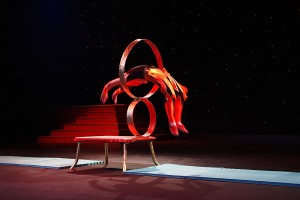 As one who’s been bored at the circus in nearly all of its manifestations the last few outings, I was pleasantly surprised by the Chinese import, Cirque Shanghai, whose production this summer at Navy Pier is entitled “Extreme.”

Essentially a fast-paced and carefully choreographed showcase for Chinese acrobatics and tumbling, with ample Oriental trappings, this show is not one for the very wee pals, since it is devoid of animals and mostly absent clowns and slapstick humor, but rather for the kids and adults who can appreciate what the human body is capable of doing, and is doing onstage. Apparently the “Extreme”-ness comes from the grand finale motorcycles-in-a-globe bit, which is a familiar circus act taken up several notches here.

At seventy intermissionless minutes, the show avoids the tendency that plagues most circuses to linger on a bit too long, making for a very pleasant evening in the open summer air of the Skyline Stage, whose days are apparently numbered based on recent civic pronouncements. (Brian Hieggelke)