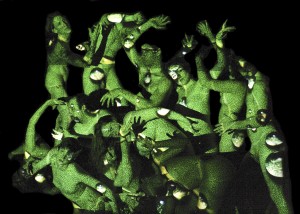 For its third annual “Naked July: Art Stripped Down” festival, The National Pastime Theater has lined up three hour-long shows, a lobby full of art, a cinema series (including films like “Fritz the Cat,” “Caligula” and “Hedwig and the Angry Inch”) and several themed parties. Compared to last year’s offerings, 2011’s Naked July feels a lot more like a complete festival, though surprisingly, there’s a little less nudity this time around. After admiring the eclectic artwork (a collection culled from 275 entries) I checked out all three shows, with mixed results.

“Beast Women” features a rotating cast of thirty women, with titles ranging from standup comedian to burlesque performer to songstress, and each of the ten shows included in the Naked July lineup includes a mixture of six or seven of these performers displaying their talents one after the other. It’s a great cabaret-style lineup and there’s definitely talent on show here, but aside from some brief nudity in a performance art piece and partial nudity in a burlesque, the nakedness in the show I saw was much more emotional than physical.

With all its “thees” and “thous,” Oscar Wilde’s biblical-sounding dialogue is a bit much for most of the actors in “Salome” to handle, resulting in some especially wooden performances and a lackluster first half. David Bettino carries the show acting-wise as an arrogant but troubled Herod, while Joshua Harris (Iokanaan) and Becca Wolfe (Salome) handle the nudity aspect—Harris for the entire show and Wolfe for the brief climax of her dance of the seven veils. Overall, the nudity angle feels a bit forced here and the acting isn’t strong enough to justify this show without that gimmick.

“The Living Canvas: Rain” is the real heart and soul of the festival. It includes the most nudity and in the least gimmicky fashion. “Rain” is the eighth Living Canvas show in Chicago and it’s clear that artistic director Pete Guither has really made this one a collaborative effort. Working with a script by Bill Daniel, sound designer Isaac Mandel and director/choreographer Gaby Labotka (along with the talented cast) have created a moving, funny and visually striking piece that plays out beneath Guither’s projected images. Like the water that the show constantly references, “Rain” effortlessly flows from one vignette to the next till it reaches its impressively splashy finale. Most notably, “Rain” succeeds in its mission of letting the audience see the (non-sexual) beauty in bodies of all shapes and sizes.

The third annual Naked July festival may be a hit-and-miss affair, but “The Living Canvas: Rain” should not be missed. (Zach Freeman)