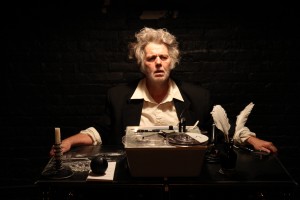 Beckett’s one-act about an old man playing back his annual taped birthday diaries walks a fine line between absurdist and tragic; and Krapp himself oscillates between clownish and piteous as he mocks and condemns his past tapes and selves at his desk—in between stumbling to a back room for drinks. Signal’s production knocks it out of the park with the set, cleverly using the black-box space so that the audience of a dozen is stuck deeply in the scene, with Krapp stumbling around us as he attempts to navigate his darkening little world. Vincent L. Lonergan carries the one-man show handily as the shuffling, inflexible, quintessential old fool; and while Aaron Snook’s direction under-emphasizes some of the play’s best jokes, he paces the show perfectly and generates epic pathos in the play’s final moments. (Monica Westin)