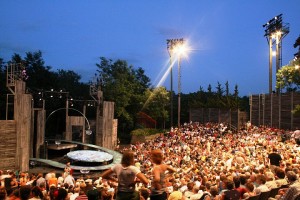 Every summer, something unusual happens in the forests of southern Wisconsin. On a hill just outside the tiny town of Spring Green, a classical theater opens its doors each June and begins a summer of Shakespeare (and other favorites) from a stage with the sky for a ceiling. For the intrepid, theater-loving Chicagoan, the three-hour drive to Spring Green is well worth the time. American Players Theatre—or APT, as it is affectionately known—has recently begun its thirty-second year of performances, and promises a season of classical plays performed against a backdrop of all the best that summer has to offer.

Matt Schwader’s is a familiar face in Chicago theater, but every summer he vanishes from our stages in favor of APT. “There’s a huge chunk of my heart that still belongs to Chicago,” he says, but he would have been “crazy” not to join APT’s Core Company, a group of actors committed to returning every season. His first trip up the hill was as an audience member in high school, and he credits that with his continued interest in classical theater. “I’ve always had a fondness for this place in my heart, and it’s because they do such great theater and it’s so rooted in being human,” he says. “They honor the language in a way that few theaters do, at least in this level. Everybody tries, but this place is devoted to doing extraordinary work with language. And I love it.”

The strength of APT, Schwader feels, is the Core Company and the number of other artists who return year after year to pursue that common interest in language. “There’s a kind of collaboration that happens here that I think is extraordinary. I feel like in theater in general that can be difficult—in most places, you’re there to do your job, and everybody else is doing their own separate jobs, but here it’s very collaborative. And I think the result is—ultimately—it’s a passionate, heartfelt production from inside and out.” Critics in Chicago and New York alike have recognized the caliber of those productions, as has their annual audience of more than 100,000 and growing.

While the chance of bad weather may seem like a serious risk, APT’s outdoor space is also one of its great strengths. Schwader enjoys the challenge of performing outdoors: “Up-the-Hill, you have to adjust your performance to fit the universe you’re in. That can be difficult if you’re playing a quiet, intimate scene and the wind is blowing so loud you have to compete with the trees. But on the other hand, as an actor it truths you up, because you can’t deny the reality of the situation. You can’t pretend it’s not raining, because it is, and it’s so obvious, and there’s a lot of fun to be had.”

For those who don’t want to risk rain or mosquitoes, APT recently opened the Touchstone Theatre, an indoor space that allows them to stage smaller-scale productions and extend their season into colder weather. The Touchstone offers a very different experience for audience and actor alike. Performing for the first time in the Touchstone this season, Schwader enjoys the intimacy of the space, the connection to the audience it affords… and the rest it gives his vocal chords.

The visitor to Spring Green is not limited to APT, and Schwader recommends taking a weekend to explore. “One of the things I love about working up here is that you get the whole river valley, so there’s canoeing, hiking, bicycling and there are so many arts around here with [Frank Lloyd Wright’s] Taliesin and every weekend there seems to be some sort of festival,” he explains. “It’s great to get out of the city and breathe some oxygen for a change.”

That oxygen and theater of consistently high quality make Spring Green a perfect summer getaway. “You can’t deny the kind of supernatural magic of this natural setting,” Schwader says. “There’s something unique here. Why did Frank Lloyd Wright come here? Why did they choose a hill in the middle of a forest to build a theater? What is it about Spring Green and the surrounding area that draws this kind of energy? For some reason it does. Not only is it the hard, ‘blood, sweat, and tears’ work we put into it, but I think there’s something in the water, too.”