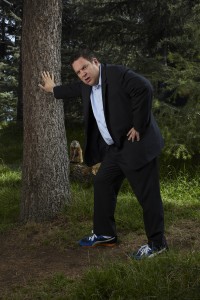 At some point in Jeff Garlin’s free-wheeling stand-up comedy routine, he announces, “I’m the world’s most comfortable comedian. Not the world’s funniest, which is what you want, but the most comfortable.” That’s about right. Garlin’s show is less “show” (as he makes pains to point out more than once), and more like hanging out with him, at a dinner party or something. He tells stories—vignettes drawn from his life as comedian, TV star and, most significantly, someone with an eating addiction. (He’s also diabetic and new medicine, on opening night, led to spontaneous burps that he managed with reasonable grace.) Most hinge, not on punch lines, but on ironic turns or, often, just in his way of telling, in his timing. He bounces from story to story, as if he’s making it all up as he goes along, starting a tale, getting distracted, telling another and circling back, occasionally consulting a “set list” he’s got stashed behind his plastic jack-o’-lantern filled with water. His stories are not political, or connected to current events at all, and he’s careful not to lean too heavily on his experiences on Larry David’s “Curb Your Enthusiasm,” which is smart, since I imagine most of the audience members, like me, are fans of the HBO show and in doing so he keeps us hungry for more. He’s preoccupied, it seems, with pumpkins and gays; the latter not in a homophobic way but not especially enlightened either. (Perhaps his views are evolving.) He has a casual rapport with the audience, interacting freely with those in the front row, and the audience members, who feel like they know him well thanks to the one-way friendship that a TV series offers, laugh at all of his stories. (I have no way of knowing how this would be received by someone who’d never watched “Curb.”) He flirts with the surreal at times, openly yearning to go into Andy Kaufman territory and allowing himself to go on short jags of bizarrely amusing free association (a chocolate talking dreidel?) but, really, Kaufman’s signature was to make audiences uncomfortable, not exactly consistent with being the world’s most comfortable comedian. His penultimate bit does succeed in bringing the night down on an uncomfortable note, unfortunately. He unexpectedly offers up Q&A, “Anything you want to ask, about ‘Curb,’ anything” and the starstruck audience fumbles with insipid questions, like fourth graders meeting Officer Friendly. “Who’s funnier to be with, Larry David or Jerry Seinfeld” (Obvious answer, “They’re both funny in different ways”), or “Arrested Development?” (“Yes. That’s not a question.”) “What was it like to work on the show?” where he had a minor recurring role. (“Fun.”) Soon, we’re all frustrated and he’s answering questions with “Fuck you,” but he’s our pal, so we know he’s not really hostile, right? It’s possible that this is his Andy Kaufman moment—after all, he’s telegraphed his desires in that regard—but I don’t think so. The audience’s questions were simply bad. (I came up with a good one on the train ride home, as did many other audience members, I suspect.) On “Curb Your Enthusiasm,” Garlin plays the character of Jeff Greene, Larry David’s agent. It is a character, yes, but perhaps since so many actors play themselves on the show, you tend to assume that much of this character is Garlin himself. In any case, this makes the audience feel a strong personal connection to him on stage, from the start, a connection enhanced by his casual riffing on his days growing up in Chicago and the Chicago area. He was born, I found out, the day before I was. The same year, everything. I really wanted to tell him that. We’re good pals, after all. (Brian Hieggelke)