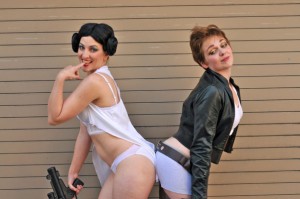 Episode four of the now ubiquitous (at Gorilla Tango, at least) Geek Girl Burlesque series launches into the land of “Star Wars” by placing the infamous introductory words (“A long time ago…”, etc.) on the derrieres of the dancing cast. Of all the previous GGB showings, “A Nude Hope” sticks the closest to the script, lovingly satirizing “Star Wars: A New Hope” with less than subtle jabs at the story and plenty of partial nudity. The script by M.C. Curran isn’t necessarily funnier than past GGB shows, but the leads here help make it the funniest yet. Both Bottom Heavy Betty as the angsty Luke Skywalker and Cinnamon Twist as the arrogant but dashing Han Solo draw big laughs with their deliveries, but it’s veteran GGB performer Diva La Vida that steals the show as the aging Obi-Wan Kenobi, proving that even a bearded old man can be both sexy and hilarious. (Zach Freeman)