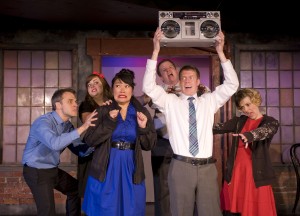 The lightheartedly ominous backdrop (the Chicago skyline with a colorful storm bearing down on it) of the Second City’s thirty-fifth revue on the e.t.c. stage nicely sets up the theme of impending disaster that runs through this series of sketches and songs. Whether it’s a zombie apocalypse, an unexpected pregnancy or a couple arguing after getting kicked out of Wrigley Field, it seems the world is always on the brink of falling apart. But the energetic cast (made up of e.t.c. veterans Tim Baltz, Brendan Jennings and Mary Sohn along with newcomers Aidy Bryant, Jessica Joy and Michael Lehrer) handle it all with big smiles and the occasional shot of quirky emotional depth. The lightning-fast “pop quiz” bits that open each act are engaging and demand that the audience “pay attention” but, although the first act is strong and takes a number of risks that pay off, the show loses some of its momentum after the intermission and never quite gets it back. (Zach Freeman)