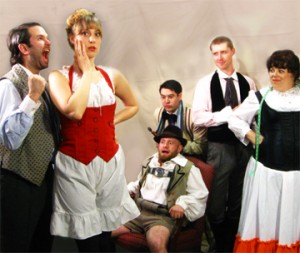 In the opening moments of Steve Martin’s “The Underpants, ” a scandalized Theo Maske (played as a comically manic buffoon by Jack Birdwell) storms onto the stage screaming at his wife Louise (a calmly charming Jessica Maynard). Her underpants have just fallen to her ankles while the couple was watching the king’s parade and Theo is horrified of the impending scandal. The ninety minutes that follow are a farcical romp through Germany in the early 1900s complete with two lascivious suitors (Josh Nordmark and Jeremy Cohn), a nosy and bawdy neighbor (Calidonia Olivares), a mild-mannered professor (Jason Dabrowski), and plenty of over-the-top chauvinism. Director Lavina Jadhwani plays up the physical comedy throughout with mixed results. The actors’ full commitment to their cartoonish characters is admirable and helps land many of the gags, but there are times when some of the overplayed bits distract from the action or overshadow the dialogue. (Zach Freeman)