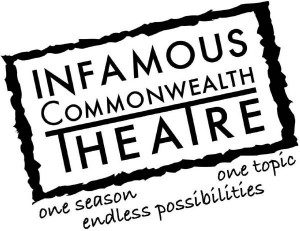 The Infamous Commonwealth Theatre (ICT) has been producing critically acclaimed plays since 2001, but announced Monday that it has ceased operations. “It was something we all saw coming, ” says Genevieve Thompson, founding artistic director of ICT, “but it was a sad resignation.”

Thompson describes the closing of ICT as an amiable end, but a regrettable one. “When we started the company, we were all in our twenties,” she explains. Much of the ensemble was just out of school and able to commit the time required to ICT. Ten years later, many of the ensemble members have demanding full-time jobs and families. “It required too much time from people who couldn’t give that time without pay,” she says. It became harder and harder to put up each show while maintaining the level of quality their audiences had come to expect.

Despite the closing of ICT, Thompson has no plans to exit the theater scene, and feels confident that her fellow ensemble members will continue working with other companies in Chicago. “For every theater that closes, there are more opening,” she says, and hopes the recognition ICT’s plays have received will help the ensemble find new artistic homes elsewhere. She plans to maintain ICT as a company for a few years, in case it becomes feasible to produce plays again. “It is one of my greatest loves, my biggest dream, and one of the most amazing things that has ever happened to me,” she says. Reforming the company is “certainly a hope.” (Erin Kelsey)