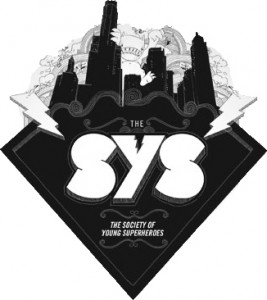 While the summer blockbuster season is primetime for the fan of comic-book superheroes, Jack Tamburri and the Society of Young Superheroes are offering a theatrical alternative to those too-often-unsatisfactory films. Tamburri is directing “POWERLESS: Issues 1-3” with the SYS, a “comic book play” about a group of Chicago-based young heroes.

The comic-book aspect of the performance is most evident in the 200 original “panels” that are projected onto areas of the stage throughout the performance. The panels depict scenes that contextualize the staged action with visual information or tell a parallel story, and were a key part of “POWERLESS” even from the early stages of the script. Comic books combine the visual and textual, Tamburri explains, and theater offers even more possibilities. “It’s a coagulation of a lot of different modes of storytelling,” he says. To the text of the script and visuals of the panels and staging, they have added voiceovers and a score, which is performed live.

“POWERLESS” is presented in three parts—they call them “issues”—on different days of the week. Audience members will be given punch cards that will allow them to see each issue at any time during the run. Thursday nights feature Issue 1 with a musical performance following the show, Fridays Issues 2 and 3, and all issues are performed on Saturdays.

“It’s a love letter to superhero comics and to the city of Chicago,” says Tamburri. And it promises to be more entertaining than “The Green Lantern.” (Erin Kelsey)

“POWERLESS” will be performed at 3429 West Diversey, July 28-August 20. Suggested donation is $10 for a punch card. Details at societyofyoungsuperheroes.org.