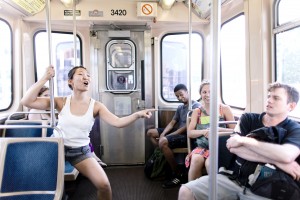 Jumping from the Red Line to the Brown Line, the Waltzing Mechanics have added a few new faces to their troupe and a little more depth to their stories, though the general outline remains the same: anecdotes collected from various El riders are acted out by the cast as the train moves from station to station. Starting at Washington and Wells and heading towards Kimball, this seventy-minute train ride, captured visually by a simple collection of chairs and aurally by the easily recognizable El announcements, is consistently entertaining. Whether it’s a story about purse theft, getting (or getting out of) a ticket for underage drinking, or just getting a backpack in the face, the cast creates an endearing set of commuters. The interaction between storytellers is an enriching addition to the formula, peeling back the curtain a bit on the story-gathering process. Though most stories are comical, a discussion of suicide in front of a train is especially frank and poignant. (Zach Freeman)