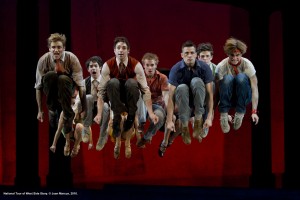 In the most daring piece of music ever composed for a Broadway musical, Leonard Bernstein’s climactic “Quintet (Tonight)” near the end of Act I in “West Side Story” uses the template of a grand operatic ensemble combined with a Bach-like sense of counterpoint with spicy Latin rhythms and contemporary jazz harmonies. Acting as a beacon of clarity within that complex structure are Stephen Sondheim’s masterful lyrics, the best he ever wrote for any show, including his own.

It speaks to the best and to the worst aspects of the current touring production of the 2009 Broadway revival of the show that most musical theater cognoscente would consider the greatest musical ever written that this “Quintet” is delivered with remarkable transparency musically and yet, its meaning muddled by the bizarre inclusion of Spanish—actually Spanglish, in this case—into the mix.

The symmetry that comes from the Jets singing “Well, they began it” on one side of the stage answered by Sharks singing “Well, they began it” from the other side of the stage with both gangs in unison singing, “And we’re the ones to stop ’em once and for all” to emphasize their unity in hatred and conflict is thoroughly obliterated when the Sharks answer in Spanish. Even if you know the lyrics, the verbal gibberish that comes from both sides distractingly making this declaration simultaneously in two different languages is one of the most destructive artistic examples of an attempt to heighten authenticity gone awry.

If you want to do “West Side Story” in Spanish for a Spanish-speaking audience, great. But why offer bilingual dialogue and song verses, sans translation or subtitles, for an English-speaking audience, particularly when the symmetry of the song lyrics and comic timing and meaning of key points in the story are left on the cutting room floor in the process? 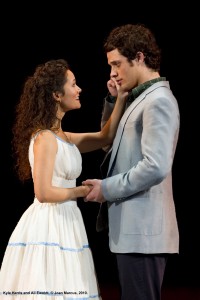 With that sizeable caveat aside, and despite a Tony with an uncontrolled quiver who at least on opening night swooped into his climaxes under pitch during “Something’s Coming” and “Maria,” this elaborate production with all of the trimmings serves as a sobering reminder of exactly why this show not only revolutionized but remains the “sine qua non” of the genre.

For those who think of Bob Fosse or “A Chorus Line” dancing-for-its-own-sake as the essence of a dance show, Jerome Robbins’ constant character-driven choreography, which is recreated here by Joey McKneely and which at every twist and turn adds an energetic dimension to the story, likely will look like something from a galaxy far, far away. To have a first-rate group of young acting dancers do these steps in character as intended to a superbly rendered live account of Broadway’s best score with full instrumentation as originally conceived is a rare and wonderful theatrical luxury these days that is not to be missed.

And the central element, namely that we watch two bored and anxious teenagers (Kyle Harris, Ali Ewoldt) from two different worlds fall in love despite the bigotry and hatred surrounding them comes through in sharp relief, thanks to the extraordinary chemistry between the two principals. Both characters make a joyous and then heartbreaking journey, and we make it with them. I defy anyone who claims not to like musicals to experience this production and remain unmoved. (Dennis Polkow)

There’s a ongoing debate about the use of Spanish in this production on Facebook: https://www.facebook.com/newcity/posts/150025321743893